Boating Accidents DUI Defense Lawyer: What You Should Know

Unlike our highways, waterways do not have marked lanes, road signs and street lamps. Our boats do not use the same braking mechanism as cars do. Aside from the big difference in operating environment, like any motorized vehicle, the three main contributing factors of boating accident are the operator’s error, machine failure, and excessive speed. These factors, when combined with DUI, can lead to even worse accidents.

Arizona is now ranking fifth in boating accidents and seventh for the most number of injuries. The most common occurring accident is collision with other vessels and Influence of alcohol accounts for 1/3 of all recorded fatalities.

During the summer, expect Arizona local officials and other law enforcement agencies to set up DUI checkpoints to make sure of the safety on waterways. Local officials are peace officers with licenses having the same authority as the police to stop, investigate, and arrest criminal acts. This is their way of keeping the boaters vigilant of the law and to protect others from unsafe boaters. 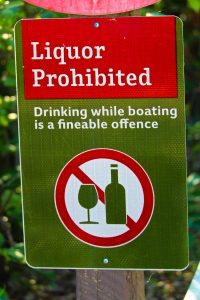 While it has similarities with DUI laws, Arizona has passed several revisions to the boating DUI bill. According to A.R.S. 5-395, it is illegal for anyone to use or be in control of a motorized vessel under any of these circumstances:

If arrested, the penalties and charges suspects might face in Arizona vary depending on the degree of the offense. According to A.R.S. 5-395.01:

It is possible for 9 days of the jail sentence to be suspended with the proper court order provided that the person completes the alcohol and drug screening and the treatment program, so long as the offense did not recklessly endangered another person with a substantial risk of physical injury.

It is possible for 30 days of jail sentence to be suspended with the proper court order provided that the person completes the alcohol and drug screening and the treatment program, so long as the offense did not recklessly endangered another person with a substantial risk of physical injury.

Boating DUI requires someone who has the expertise in defending this type of case. It is possible to drop all the charges right away given the right circumstances if the situation is dealt quickly. There are cases where suspects can appeal for an Illegal search that violates the Fourth Amendment. Declining Field sobriety tests is possible if the situation can clearly go against the suspects’ favor like performing in wet and unstable surfaces on the boat. An experienced lawyer can also help defendants when faced with outdated and not properly calibrated breath test devices. Lawyers can help the victims defend their rights relating to race, religion, gender, sexual preference or age when there is no reasonable suspicion present.

Consulting an experienced lawyer will help defendants deal with their case quickly and properly. The right lawyer can even make the charges and penalties lower or be dropped completely. Robert A. Dodell is an experienced criminal and DUI lawyer practicing law for over 30 years.