What Makes an Assault Aggravated?

Charges of domestic violence should always be taken seriously. The State of Arizona has many laws concerning domestic violence and has been very serious about enforcing these laws to the fullest extent allowable. In some cases, the state prosecutor can pursue charges against a person accused of this crime, even if the victim changes their mind and refuses to press charges or provide testimony in the case.

If you are facing charges for domestic violence or are currently under investigation, protect your rights and schedule a consultation with criminal defense attorney Robert A. Dodell. Legal representation in Tempe courts will allow you to aggressively fight these charges and get the best possible outcome for your case.

Many criminal offenses, including the listing crimes below, may be enhanced by adding the allegation of domestic violence to the crime.

Any additional charges that are added to the domestic violence charge can significantly increase your risks for serious criminal punishment.

What is Domestic Violence?

According to Arizona state law ARS § 13-3601, domestic violence means any act that where there is the following relationship between the victim and the defendant:

A conviction for domestic violence in Arizona can result in a jail sentence. However, first-time offenders may potentially get a sentence that does not include jail time..

Sentencing for domestic violence for a first time offender can include the following:

It should also be noted that anyone convicted of domestic violence will be required to take part in a court-ordered Domestic Violence Class and financial assessments. You may also be required to serve probation and community service at your own expense.

In addition to the penalties imposed by the court for being convicted of this type of crime, you may find that you may also suffer the following consequences from being convicted:

Why Hire Robert A. Dodell, Attorney At Law

Robert A. Dodell, Attorney at Law, understands the seriousness of being charged with domestic violence. I also understand that there are two sides to every story. In an atmosphere where domestic violence accusations are often used to manipulate divorce and child custody proceedings or as a tool for vengeance, Attorney Robert A. Dodell is aggressive about representing clients charged with this type of crime.

The outcome of your case can never be guaranteed. However, with a knowledgeable attorney representing your case, who firmly believes in protecting the rights of his clients, I will seek to secure the best possible outcome no matter the charge.

Check Out My Avvo Reviews 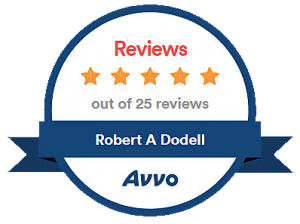 Send me a message

Why Choose Robert A. Dodell As Your Attorney